For more immersive user interaction, Finger Tracking would be a great feature. It could be a replacement or alternative to “screen tapping”.

Hey @Tobias_Reidl
We have been testing hand tracking to achieve something like this but it’s not very accurate since it only tracks your palms:

If you’d like to get the hand position in 3D, the AR depth manager can infer the distance with the DepthManager.DepthBufferProcessor.GetWorldPosition() function: 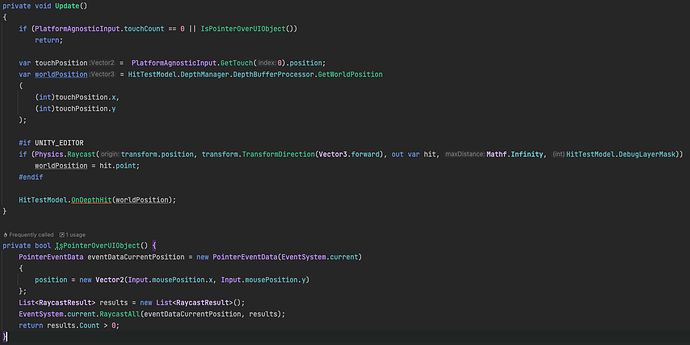 You can put in the center of the palm which is in screenspace and get the position that way.

For more detailed finger tracking i’d suggest using a different media-pipe and check if it works in combination with Lightship. Here is a twitter thread where i asked some questions to a developer who got it working with Lightship: https://twitter.com/rainage/status/1576248499473354752

Cool, thanks mate. I’ve also been trying plugins, however it adds the difficulty of projecting the Camera image to another Camera that then again does the Handtracking. Would be easier to have this integrated in Lightship

Hi Tobias, We’ve had loads of interest in further expanding the capability of palm tracking in ARDK. As an improvement, it’s not on the roadmap yet but keep an eye on our new releases as this technology continues to advance. Thanks for using Lightship!