These steps are intended to be a temporary alternative solution while we update the existing guide.

…the host device not sharing tap events with peers…

…the peer car persisting on the host device when the peer loads into another scene, such as the SceneSelector published with ARDK Examples…

…or the peer car not loading in a pre-existing host car after connecting.

If you’re trying to create a network multiplayer sample scene but have run into the issues with the published guide, you can follow these steps as an alternative peer-to-peer solution that addresses the issues listed above. Let’s build!

NOTE: These steps demonstrate creating the ARDK components manually rather than using the manager components.

Note: The following steps go through the script creation process in detail. The resulting script – with in-line comments – is available for download, attached below this post. 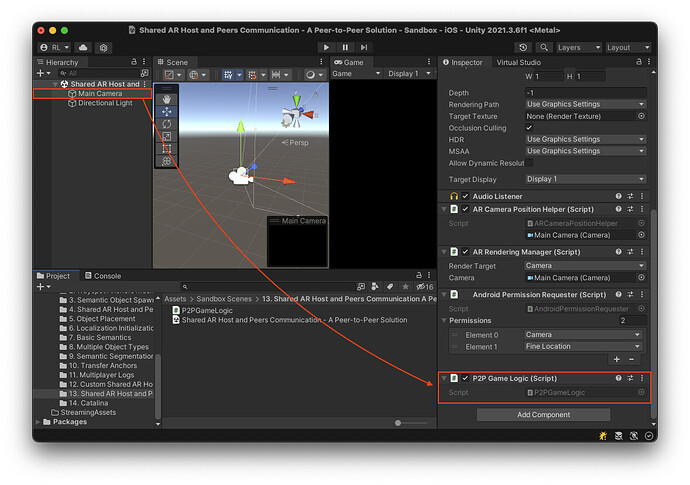 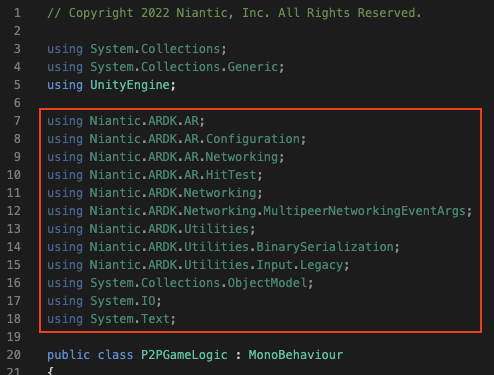 Note: In this example, we’ve hardcoded a string “SampleSessionID” to represent the session identifier.

Note: The CreateCar() and BroadcastCarPosition() methods will be written in the following steps, so disregard any error indicators suggesting that the methods do not yet exist. 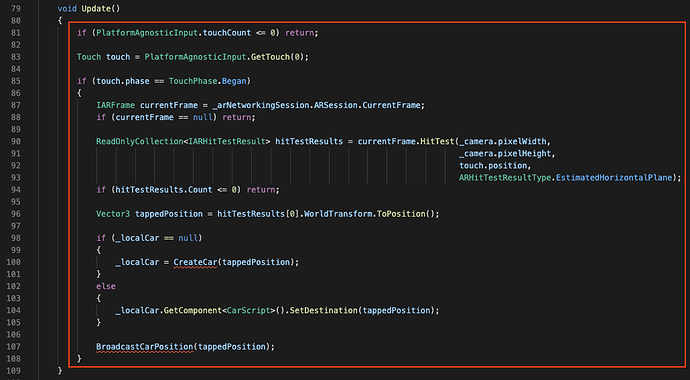 Note: Before building, don’t forget to set up any project-wide settings for ARDK, such as the ARDKAuthConfig object that requires a valid API key generated by your Lightship account.

Now, you should be able to observe…

…the host device shares its tap events with peers…

…the peer car is cleaned up when closing the app…

…and the peer device loads a pre-existing host car after connecting. 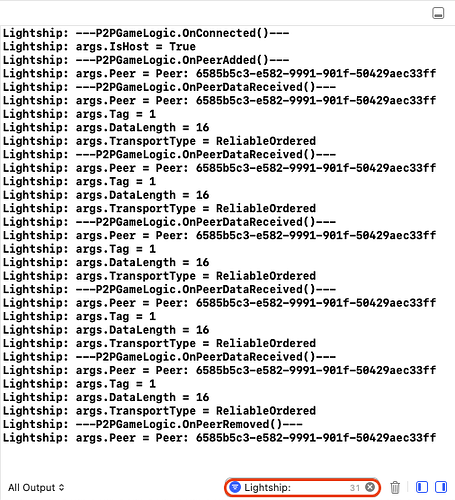 Thanks for following along with this alternative solution, and we look forward to seeing any networking projects you build with ARDK!

Thank you very much for your clear guide. This helps me a lot.

Thanks for this update. Could you share if all this new “P2P” code is meant as a giant bug fix to the guide, or would there be situations where you’d still want to do things similar to the original guide (i.e. the Host-Peer method)? Because from my understanding it just seems like the original guide is buggy (as you showcased at the top of this post) and there’s never a reason to do things that way. Could somebody at Niantic clarify?

There are issues with the currently published guide that result in bugs, and the team is working on a resolution at this time. These steps are intended to be a temporary alternative to creating a network multiplayer game while the original guide – which follows the authoritative-host model – is undergoing updates.

Hi @rob_link thanks for the clarification. Can I just confirm that the mistakes are with the guide itself, and not bugs in ARDK? Looking at the guide (without testing the code myself) it does seem to lack some steps that would cause the bugs showcased in this thread. I think I’d be able to fix it and just want to confirm that there aren’t any inherent bugs with ARDK if I wanted to implement a host-client architecture myself.

Great post! Does anyone know how this P2P method would compare latency wise to the standard host-client architecture? It seems each individual is somewhat functioning as a host for their own car and a peer for all other players, similar to the normal sense. When I’ve done something similar by having each individual have authority over their own spawned networked objects regardless of being host or not, I would encounter a degrading accuracy with tracking and encounter more latency as the session persists.

That’s correct, @Kang-An. The issues are with the steps laid out in the guide and not the ARDK classes. It’s still possible to have the host device be responsible for message distribution if you’d prefer to implement that paradigm.

Just to be clear, this alternative guide still uses the host-client setup under the hood. However, the messaging between devices is handled in a peer-to-peer style where all users (regardless if they are the host or a client/peer) are responsible for sending their events to all other users, rather than event messages being passed to the host in order to be re-distributed to the remaining peers.

Latency-wise, the method described in this guide should theoretically result in lower latency overall, as a peer updating its car position is broadcasting a single message to all other users, rather than the message being first sent to the host, then re-broadcast to the remaining peers. However, I wasn’t able to test this in practice so I’d be interested in hearing from anyone experiencing different results.

It is worth noting that – according to the Lightship docs – multiplayer sessions with ARDK should generally consist of five or fewer participating devices with a single session lasting five or fewer minutes.