Using a mock environment or private wayspot with the VPS tutorial

I’ve gone through the VPS tutorial on the 'Learn" section of the Lightship website and ran it in one of the virtual environments (Park pond / Livingroom) but it doesn’t work. I’ve also created a private wayspot in my studio, but don’t know how I would use that in the context of this tutorial. Is there a further video, or example in the ARDK, or place in the documentation where I can learn how to use a mock environment or my private mesh in order to develop using the VPS? I am in an area with no currently mapped VPS Wayspots so I need to start in a mock environment first until I or others can get a few locations on the map here.

You mentioned the MOCK Environment doesn’t work. What expected outcome are you not experiencing? Which tutorial are you following? For better visibility, please provide a screenshot of your issue and a copy/paste of any console error logs. Creating private meshes allows developers who are not close to VPS activated locations an opportunity to localize against local user generated content. This way they can test the visual positioning system, placing persistent objects, etc. in private, without having to travel to the closest location to test. Engineering has been requested to create new VPS documentation and video tutorials, though current tutorials on mock environments and VPS can be found here:

I’m following this tutorial and am getting no errors, however no prefabs are placed when I click on the detected horizontal planes. Below is a screen shot. I also built it to my iPhone and used it on my private scan here in the studio, and while it did localize, I could not place prefabs there either. 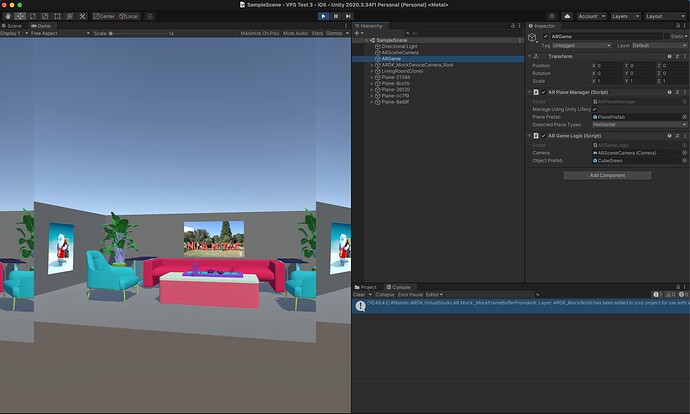 However, I have been able to get the WayspotAnchors scene working that was included in the ARDK examples, so I’ll probably go ahead and use that as the basis for my further explorations.

Try the solution below:

I ran into the same small trap with differently named functions OnSessionRan and OnSessionStarted. It’s just with the video; the written tutorial seems to be consistent. Maybe someone can add a hint in the video.