Hi there,
i am developing an app with Lightship SDK and i think i have found an error when developing with specific iOS/XCode settings (see above). Deploying my app on an iPhone with iOS 15.4 works perfectly, but on iOS 16 the app wont start properly (grey background screen and the following “error message”) and cant open the app. It seems to me that the task is continously running as it is stopped by a EXC_BREAKPOINT. 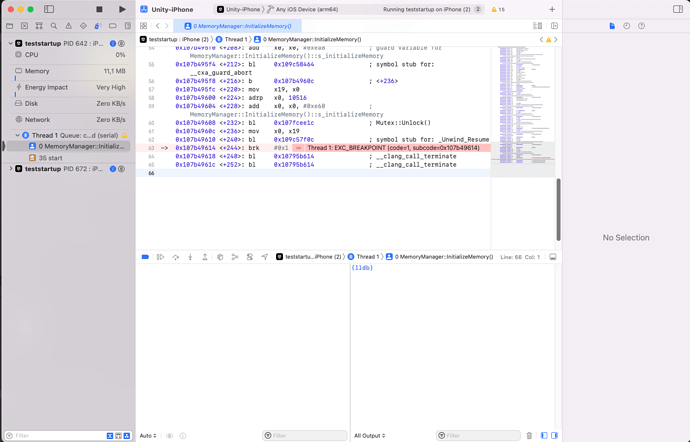 Has anyone seen this bug/problem? I really dont know whats going on, and the problem seems to be specifically appearing with iOS16.

This is a known issue that currently affects iOS 16 devices while running Xcode 14 as you’ve noted. Once the app has been deployed to your test device, you can stop the app execution from Xcode and instead manually run the app by launching it on the device without Xcode attached in order to bypass the error.

We’re aware that this currently inhibits developers from gathering valuable debugging information via Xcode. If you need access to the Xcode debugger while you await a fix in a future version of Lightship ARDK, you may want to try downloading a previous version of Xcode – such as Xcode 13.4.1 – from the Additional downloads section of Apple’s Xcode Resources page, which can be found here: https://developer.apple.com/xcode/resources/

Okay thanks, I was wondering if I was doing something wrong…

Is there any plan to fix this issue in the near future?

This issue has been brought to the attention of the engineering team, and will be fixed in a future release. You may want to regularly check the Lightship ARDK release notes – found here – for updates on new features and bug fixes.

Just to save other people time - if you are already on MacOS Ventura, any version of Xcode pre-14 will not work, including Xcode 13.4.1. Really hope a fix is coming soon!

There is a fix for this issue here
You can either disable the Thread Performance Checker in XCode or there is a helpful editor script at the bottom of the page that you can add to your Unity project to automate this action.