How should a go about activating a wayspot for vps?

I made scans this week and added them to an existing wayspot in my area.
I believe my scans (10 for a wayspot, made with lidar on different days) are good enough to be localized against so i’d like to activate this wayspot for VPS.
In my wayfarer app it says: “This wayspot has received enough scans to be activated on VPS”, however i can’t find a way to submit or activate it. Is there a button i’m missing or perhaps it’s my account that’s not eligible for this?
Would love some insight into this, thanks in advance!

Hi Merijn, the Wayspots are activated by Niantic after about 60 successful scans under all different lighting conditions. It could be they’re waiting to get enough data before activating it. I’d check back periodically if you’re able. If the app says it’s received enough scans then it should be available soon

I’d hate to be a bother but is there a way to put up a certain wayspot for consideration? We’ve started development on a new VPS project and it would be a huge time saver to have an activated wayspot where i live to test against. In preparation i scanned it at different times of day and weather conditions now but it’s been more than 2 weeks.
I’ll attach the details in a screenshot below: 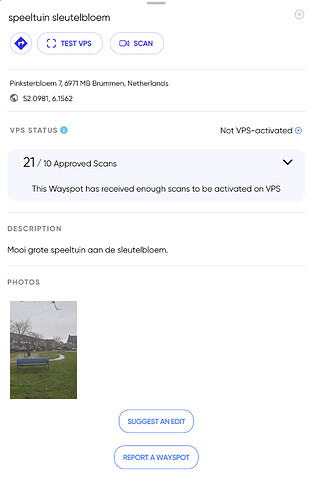 I do understand that it’s a lot of work to expand the VPS map but it’s just the lack of insight that’s difficult for me to plan around. If there’s nothing we can do than maybe more of a feature request would be a tag on locations that says like “waiting for review”, “in review”, “denied” etc… This would give developers that depend on them the ease of mind that something is happening