When I start a WayspotAnchorService with a referenced ILocationService that I created in another script beforeHand, the WayspotAnchorService is created without any error, but the localization failed with the message " LocationDataNotAvailable", even if the location service is running and returning data.

The only way I can make the localization process work is if the ILocationService is created and started just before creating the WayspotAnchorService.

Why ? Is it normal ? Am I missing something ?

Thank’s in advance for any answers …

Localization can fail for a variety of reasons, and you can check the LocalizationFailureReason in a callback method that’s assigned to listen to the WayspotAnchorController.LocalizationStateUpdated event. More information on Localization Failures & Recovery Steps can be found in the Lightship documentation here.

It sounds to me like you may be experiencing a LocalizationFailureReason of LocationDataNotAvailable, but it will be worth it to verify the failure reason on your end first to better diagnose the issue.

Additionally, it may be the case that the ILocationService is being initialized in the other script later (at run-time) than the WayspotAnchorController, especially if the two initializations are occurring in the same Unity lifecycle event (i.e. Awake(), Start(), etc.), but on separate objects. If you want finer control over the order of which scripts execute their Unity lifecycle events first, you can manually alter Unity’s script execution order by navigating to Edit > Project Settings > Script Execution Order – to ensure the script containing your ILocationService initialization is ran prior to the script containing the WayspotAnchorService initialization. This may help solve the issue if the initialization of each service is occurring in a separate script but in the same Unity lifecycle event, such as Awake(). More information on altering script execution order in Unity can be found in the Unity manual here.

Thanks for the answer, my LocalizationFailureReason is indeed “LocationDataNotAvailable”. I didn’t know that unity made it possible to manually alter script execution order so thank you for this information. But for me this is not the issue, my ILocationService is created way before my WayspotAnchorService and of course, I check that my ILocationService did exist before creating a WayspotAnchorService.

To be more precise, if I try to access an ILocationService instance created beforehand in another script where I create my WayspotAnchorService, the WayspotService is created successfully but never managed to localize because of the failure reason “LocationDataNotAvailable”, even if my LocationService retrieves data before the creation of the wayspotService.

We attempted to reproduce the issue by creating an ILocationService in one script via LocationServiceFactory.Create(), and using it as a parameter for creating a WayspotAnchorService in a second script. However, the scene functioned as expected and did not produce a localization failure state.

Can you either share any relevant script files, or include some code snippets for us to examine? It sounds like the location service being used when creating the wayspot anchor service instance may not be referencing the same location service that was created in the other script, but it’s difficult to assess without being able to examine the code.

Here are my code samples (sorry for the bad code quality I’m a beginner) : 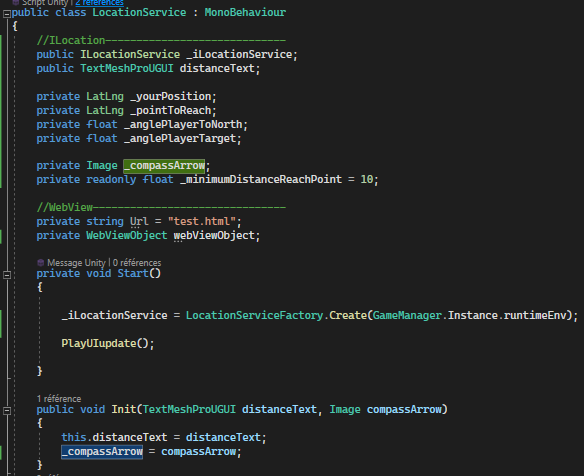 Some precisions; I forgot to tell you that in the mock environment it doesn’t create any failure reason, it’s only on the live device environment.

Thank you in advance for the time you take, and sorry if its only my bad code that create the bug

I believe the issue here may have to do with the timing order of the various component initializations.

What is the effect of feeding the WayspotAnchorService with a new instance of LocationService? That is when there’s already one running with another object (i.e. the GameStateSystem in this thread).

) to the session’s Ran e

At first, I also thought it was due to a timing order problem but I assure you that I checked everything and each individual component is initialized in the right order.

To answer your questions : 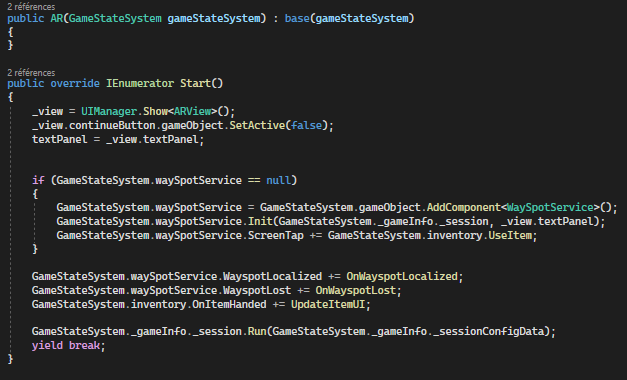 if I feed the wayspotAnchorService with a new instance of ILocatioService it works perfectly fine actually, even if another instance of it is running somewhere else but in locationService.Stop() mode.
I didn’t try to play both of them at the same time.

Hello @Nicolas_Debeurme, sorry for the delays.

We attempted to reproduce the issue again, but were unable to find any issues with creating an ILocationService instance in one script and referencing it in another to create a WayspotAnchorService. We were able to build a project that successfully localizes when doing so.

Are you still experiencing this issue? It sounds like it could be a problem with the state machine, and I’m wondering if you’ve tried attaching a debugger and setting a breakpoint just prior to creating the WayspotAnchorService in order to inspect the ILocationService that’s being passed in. It’s possible that may grant some additional insight as to what exactly is failing.

Also, the session being ran during Unity’s OnEnable() is only relevant when using the ARSessionManager component with its ManageUsingUnityLifecycle boolean set to true. It sounds like you’re creating the AR session manually, so you can disregard the remark about OnEnable().