I’ve been playing around with some private VPS scans and wanted to be able to easily drop my downloaded mesh file into unity and treat it like any other model. Just for the sake of mocking up my 3D against it in editor or checking out the accuracy of the mesh without needing to localise.

@NNDev made a helpful post explaining how they’d used the tools supplied in the draco repo itself, but it all seemed a bit frustrating and limiting to use. So I wrote a scripted importer for the drc file type.

This means you can drop the unzipped drc file downloaded from the lightship dashboard directly into your project. It will generate the prefab and meshes ready for use. 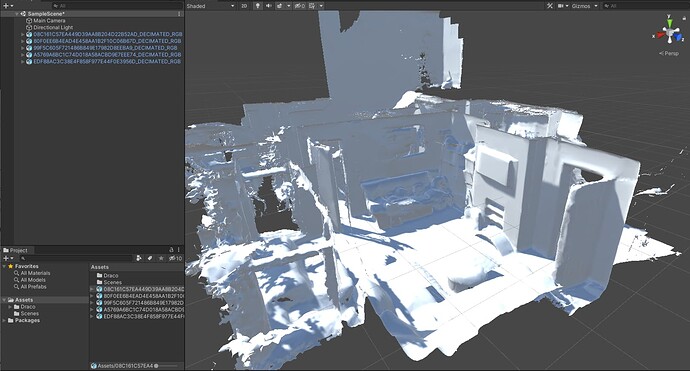 The only requirements are that you have the draco plugins and use my slightly edited DracoMeshLoader script - not the one as it comes from the draco repo.

All of that is included in the linked downloadable package.

I’ve only included the Windows and MacOS draco libraries there because I always intended to use this only as an importer while working in the editor.
The final thing to note is you’ll need to have allow unsafe code enabled in your project settings.

For those that are interested (and so it’s documented somewhere) the edits I made to the DracoMeshLoader from the original repo:

I hope this might help some others, let me know if there are any queries on it, or is anyone else can take it further.

I’ve wrapped this up as a proper Unity package now that can be imported via the package manager.

I also added an assembly definition so you no longer need to change the allow unsafe code option globally for the project.

Nice! As well as being a much cleaner flow, I’m noticing 5 scans from my current project total 98MB imported via Google’s original plugin; 3.5MB by yours. Nice not having the extra data kicking around!