Sky still occluding GameObject even with Sky as suppressor

Bug reproduction steps: Open the DepthMeshOcclussion scene example with Sky as a suppressor. Move the cube away from camera. Notice cube being occluded by sky.

Hi. I recently upgraded to the latest version of ARDK and running into an issue with Depth Occlussion. I have it so that the depth uses the Sky semantics as a suppressor but it is still occludding my 3D gameobject after 6 meter away from the camera. Anything from 0.1 - 5 meters away works fine. Currently running the Screen Space Mesh as the Occlussion Mode and the Camera’s clipping planes are: (near 0.01, far 500). Its also happening in the DepthMeshOcclussion scene example. It wasnt happening in version 0.11.0.

Is there a way to have the sky not occlude gameobjects completely?

Hello, thank you for submitting your question here. I will take a look at your repro steps and reach out to the engineering team for a solution to your problem.

I noticed in your specifications that you are currently on the 2020 version of Unity. The current versions that ARDK supports are 2019.4.21 and later versions of 2019.4 LTS. The issue you are experiencing may be related to the unsupported version you are using.

Got it, no worries. I am reaching out to our engineering team on this and will get back to you when I have an answer.

While I have you on here, do you mind sharing your model and OS version of the Android device you are using? Can you also provide a description/screenshot of the settings when you have the sky as the suppressor?

@Kevin_W_Young I am using Pixel 3 XL and Android version 11.
You can use the DepthMeshOcclussion scene provided in the ARDK example. Here is a pic on how it looks like.

Thank you for the provided information, I will get back to you soon when the team has responded.

@Kevin_W_Young Awesome. Also forgot to mention to add the sky as a suppressor in that example scene. Heres a pic as well. 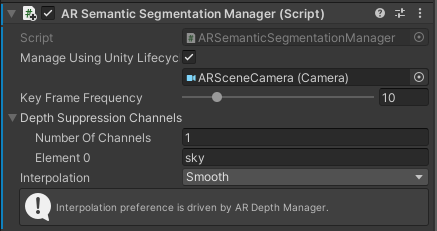 Thanks for waiting, we have found out that this is an Android and Screen Mesh specific bug and
will fix this in a future version of ARDK. Meanwhile, you can try setting the occlusions to the DepthBuffer method and see if that will fix your issue temporarily.

Also I did try it on iOS and it does have the same issue but at around 300 meters. Just wanted to bring that up to you guys just in case its not expected.

It’s a major blocker for an AR visualisation project I’m currently working on for which I’d like to make use of Lightship ARDK’s semantic detection and occlusion combinations.

Is there any fix on the way?