I'm getting this error & not sure what's missing. System.DllNotFoundException: ardk_client_platform

Hey all! Just getting started but I’ve received the Dllnotfound error when I hit play: System.DllNotFoundException: ardk_client_platform
Here’s a screengrab: https://snipboard.io/blWwIN.jpg

I noticed it mentioned this in the developer documentation but is there no fix for this?

I’m more of a creator than a developer so forgive me if this is a simple error.

I see from the screenshot that you are developing on Windows, for Android. These errors are due to the ARDK native Mac environment, though they don’t impede building or developing with Lightship on PC.

“ARDK’s native plugins are built for iOS, Android, and MacOS, and will not load on Windows machines. While developing on Windows, there may be DllNotFoundExceptions in the Unity console due to attempted native calls. These will not block building or development, but native networking in the Unity Editor will not work. Also, the Remote Debugging application will run at a degraded frame rate due to not compressing ARFrames while connected to a Windows machine.”

They do impede with development on PC. It prevents the session from starting and no mocking works.
Projects from the Youtube Channel tutorials stop working after upgrading from 1.0.1 to 1.1 because of this.

having tinkered with lightship for hours over the past few days, I’m actually fairly certain the 1.1 update breaks things across all platforms. Getting this error and nothing working in a fresh project on OSX 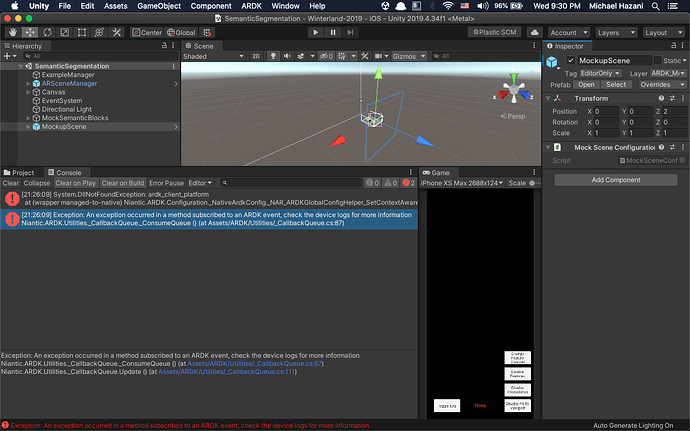 ARDK Version 1.1, build for Android on the WinOS and have exactly the same problem. It breaks things and no mocking works.

Thank you for making it known this issue persists. The .dll and associated error messages reported are being looked into. We appreciate your patience while a resolution is found.

Is version 1.0.0 still available to download ? I’m also having the same issue so looking to just get it working for now, even if it’s an older version.

Apologies, older versions are not available for download. We have raised a feature request for this: Getting older versions of the ARDK. Please keep an eye on the Lightship Community Forum for future updates. If you have issues separate from any main thread, please open a new community topic.

Same exact issue here. Windows OS building for Android on Unity 2019.4 LTS, standard rendering pipeline, ARDK 1.1.0 and 1.1.0 example scenes, fresh project. Set up the ARDK_MockWorld layer and ArdkAuthConfig file with the key. Targeting Android 10 to bypass all the Android 11 Google Play Services for AR and permission stuff. Opened up the Segmentation example scene, looks fine. Run it in editor and boom! These 2 errors. No mock service start up, black game screen with UI. Tried building an APK (which seemed to work) and installed it on the android device. Same general experience as in the editor: Black screen + UI buttons that come with the scene.

What’s interesting is that yesterday I tried ARDK 1.1.0 in Unity 2020, and I did get to the point where it worked in the editor with mock services without any errors, but I couldn’t get it to work on device.

For a similar error in Windows, commenting these lines
“if (ServerConfiguration.AuthRequired)
__impl = new _NativeArdkConfig();”
in ArdkGlobalConfig.cs made it work for me.

I had a similar workaround: Workaround for System.DllNotFoundException bug

For me, commenting out doesn’t seem to do the same thing and caused other errors so the linked workaround could be an alternative.